Wow there are some majorly dishonest people out there

Most sellers are incredibly dishonest, incompetent, or naïve. I asked questions before committing to go look at campers. I would get responses like its in good shape and everything works good. I can tell you there are drastically different opinions on what good shape is. I looked at some that were junk in my opinion and the sellers are asking full retail. I responded to two adds that the seller failed to mention that it had salvage/rebuilt title. I went to one and it had major roof damage (good thing I took my own ladder). I went to one that the seller failed to mention that the hail dents had hail dents with a salvage title. I wasted a lot of gas and time. We had almost given up and we looked at one more yesterday and it was the one. Unfortunately it has a lien and I am meeting the guy at the bank to pay the bank directly to get the lien released. Its just a minor inconvenience.

If anyone else is out there, and you are in the market, make sure you take a competent person with you to inspect or you could end up with a major pile of crap and pay full retail. I crawled under, on top of, inside every nook and storage box, inspected every seal and seam, and tested each appliance and fixture of the one that I bought. I probably spent 1.5 hours inspecting the one that we purchased. The ones that were falsely advertised I only needed about 5 seconds to make up my mind.

I also went to several dealers and most were short supply on campers. And wow were they expensive. Many used campers on the lots were several thousand above NADA. The new ones were not discounted as much from MSRP like they were. I was at one dealer and the lady let it slip that they were selling this exact model for $5000 less than they are asking today.

I also noticed many ads where people bought then in Mar-April after the shutdowns. Now the monthly payment, insurance payment, and storage payment is starting to add up. If they sell now or in the spring they will likely sell for more than they paid. If they wait a few years, I expect a surge in people trying to unload them and prices will sink. Its a hot sellers market. If you have one that you are not using, now is the time to sell.

We recently bought two cars for our kids.
One from a private seller and one from a dealership.
Both were good finds and we are happy.
But we did a lot of internet searches, driving, test driving, looking on Sundays so not to get bothered by staff, etc.
You can run the gamut on honest-dishonest people out there trying to sell big ticket items.
We just had to remember to not fall in love with anything (model, make, color, certain car, etc.) and wait until the right opportunity came along.

I don’t know where the money is coming from, maybe people saving the money they spent on travel and entertainment. Everything is pricier now, especially stuff that gets you outside. I’m in the mountain biking community and year old used bikes are going for $500 over new just because you’ll wait 6 months for the new bike to be delivered. I’ll be waiting for these high end bikes to go on fire sale in about a year because people didn’t take to the sport like they thought they would.

I sold a 20 year old specialized mountain bike for $250 in 2 days, I had planed to donate it since I thought there would be no takers. I don’t feel like I ripped anybody off, I even gave the dude a week return policy.

We just had to remember to not fall in love with anything (model, make, color, certain car, etc.) and wait until the right opportunity came along.

About 2 years ago, I was looking for a used truck. I spent 10 months looking for the one that I bought. Truck prices were HIGH at the time and still are. They are selling for more than KBB all day long.

About 2 years ago, I was looking for a used truck. I spent 10 months looking for the one that I bought. Truck prices were HIGH at the time and still are. They are selling for more than KBB all day long.

About 12 years ago I was looking for a Jeep Wrangler, my wife found one at at a great price.
They hold their value really well and are hard to find at a good price.

I don’t know where the money is coming from, maybe people saving the money they spent on travel and entertainment. Everything is pricier now, especially stuff that gets you outside.

This is no joke. For smaller ticket items, I think that $1200 stimilus check helped spur prices. For the family of 4 they would get a nice check $3,400. You also have a freeze on many federal backed mortgages, student loans, etc. This student loan freeze will result in $12,825 in delayed payments for my wife’s loans. For the record, this did not spur our decision. We still have all those delayed payments in savings account. There is no need to actually spend the money today as there is 0% interest and who knows what tomorrow will bring. We also did not get $3400 in stimulus either. Ours was about $300 because we were almost completely phased out based on 2019 taxes. My wife’s income has surged this year. Her earnings will probably be $20,000 higher in 2020 compared to 2019. People are home and spending money on their pets and she is just crazy busy.

I don’t know when this level of spending will stop. When it does, it is going to be a nasty crash back to reality. In 2020 we have also splurged on some big ticket items. We bought a pool, playground, camper, and planning home addition.

There are lots of dishonest people out there, people who prey on others. I am often amazed at the effort they put in and wonder how they sleep at night. So many scammers, etc.

But, to provide a counter example: as most of you know, my wife had dementia. In the last several years, she left her purse in dozens of places. Of course, I eventually had to take responsibility for making sure it and everything was in our possession. But you know all the times she left it at the movie theatre, Starbucks, and God knows how many other places, it always came back. And some people put in substantial effort to find and contact us. There are a lot of honest people out there.

Its good to know that you have positive experiences with people returning your wifes purse.

A similar story happened on Friday. A random cow appeared in my field with my horses. I separated the cow from my horses and feed with some high quality hay and grain. I posted a sign at the corner and finally broke through the facebooks rules that prohibit buying and selling animals. A couple days later, a local farmer responded to my ad and knew the rightful owner based on the name tag (most cows are identified by # and not name). She was a friendly cow and I figured it had to be a students FFA cow. She would come up to me and let myself and my little girls pet her. This is very unusual for cows.

The girl, her dad, and grandpa came over to get the cow. She came right up to the girl and allowed her to put a rope on her. We loaded her up and sent her home. She was nearly 2 miles away from home. She was just separated from her first calf and was out looking for her baby

Shadow is now home again but probably still looking for her baby. 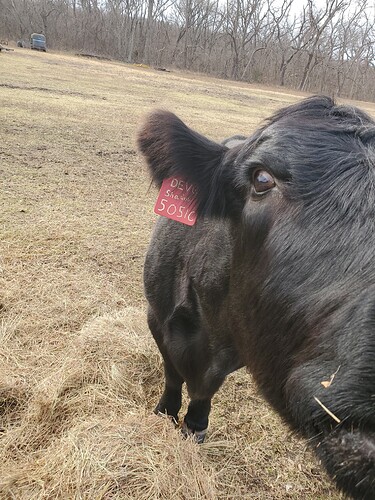