What sporting venues that have been torn down have you been to?

I thought I would start a non-political thread for a fun discussion.

In Buffalo they are negotiating to build a new stadium to replace what is now called Highmark Stadium. The current stadium will then be torn down. This got me to thinking of sports stadiums and arenas that I have been to and which have since been torn down. Overall, they don’t inspire much nostalgia, though some do a bit.

Places I never got to see in person and wish I had:
Yankee Stadium
Boston Garden
The Orange Bowl, Miami

What stadiums and arenas that no longer exist have you been to?

Tiger Stadium, including when it was called Briggs Stadium, probably 100+ times for Tigers’ baseball and pre-1976 Lions football. Nothing like outdoor football.
A few Red Wings’ games at the old Olympia Stadium, and many more at Joe Louis Arena (which replaced the Olympia). The JLA is now gone also. Even saw Dick the Bruiser wrestle the Sheik at the Olympia.
Baseball and football at the Cleveland Municipal and was there for its final event, the Concert for the Rock and Roll Hall of Fame.
Lions’ football and pseudo-football at the Silverdome, now demoed.
Pistons several times at the now gone Cobo Arena and one game at the Silverdome, which was a terrible site for basketball.
One Pirates’ game at Three Rivers when I spent a week there on business.
One Cardinals’ game at Busch Memorial Stadium c1978-79.

Been to baseball games in the new(er) Toronto, Cleveland and Baltimore stadiums. Always wanted to go to a game at old Crosley Field in Cinci, but never did despite driving by it numerous times.

Tiger Stadium was the first major league sports arena where I saw an event live. It was 1980, I was thirteen years old and we were on a family vacation in Michigan. We saw the Tigers play the Indians and it was a great time. The crowd was really into it, and it was a great baseball atmosphere.

Later that year we also saw a game at Three Rivers Stadium in Pittsburgh. That was the total opposite. That was one of those multi-purpose cookie-cutter stadiums with an astro-turf field that had no atmosphere at all. The crowd was not into it either. In Detroit the fans stood up and sang loudly in the seventh-inning stretch. In Pittsburgh, they just sat and ignored the lyrics on the pre-Jumbotron screen. The Pirates had won the World Series the previous year and were fairly decent then, so it surprised me to see that. Later on I realized what a lousy venue Three Rivers was, both in terms of the atmosphere itself and in its location.

I’ve been to their replacements except St Louis, the Milwaukee stadium is weird with its retractable roof. It felt claustrophobic even with the roof open, the retractable roof stadium where the Diamondbacks play felt a lot more airy and open.

In Detroit the fans stood up and sang loudly in the seventh-inning stretch. 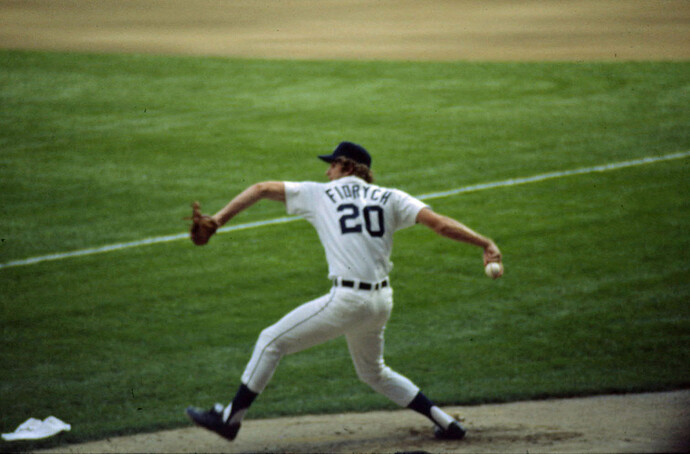 In Detroit the fans stood up and sang loudly in the seventh-inning stretch.

That’s a huge thing at Wrigley Field, they’ll get musicians and celebrities to sing, a big favorite is Bill Murray. At the United Center the crowd gets very loud for the National Anthem before Blackhawk games.

…the Milwaukee stadium is weird with its retractable roof. It felt claustrophobic even with the roof open,…

I remember reading about how they had the roof closed once and water was still leaking inside. That didn’t say much about the construction. Of course, nothing can hold a candle to the Olympic Stadium in Montreal when it comes to retractable roof stadiums that did not work. That stadium was a disaster every way you look at it.

I was fortunate one year to have my then-employer send me to a conference in Chicago when the Cubs were home. I took a few extra days and saw them play and also saw a bit of the city. Wrigley Field was great.

nothing can hold a candle to the Olympic Stadium in Montreal when it comes to retractable roof stadiums that did not work.

We went to see the Tigers-Blue Jays in June the first year the new Toronto stadium opened. It was frigid that night, dropping temps into the 30s. Fans started chanting “close the roof,” until they did and turned on some heat. They sold out of all hot beverages and long sleeve shirts of all types. Lousy stadium to see a game.

About 10-11 years ago we went to Phoenix to see the Tigers-Diamondbacks game. It was mid-June and it was 96-97 at game time. The roof was open because they had planned a pre-game parachute jump into the park. The fans started chanting “close the roof,” looking for some A/C. They did after the jump and the outside temp had dropped to 90 by the end of the game (11 p.m.).

I’m sure there are some I’ve forgotten about but I can only think of two stadiums. I saw the Super Bowl at the GA Dome in 2000 (the ice bowl) and countless Dolphins games at the Orange Bowl. Both have since been torn down.