I had forgotten I had a Sun Roof in my Forester till I saw something on line. I had to check, yes I have a Sunroof… Subaru has done a good job of making it almost unnoticeable unless you are looking for it.
Made me wonder how many folks use a Sunroof and how often.

I’ve found the best use for my sunroof. During the summer, when I’m away from home and not in a garage, that opening up the sunroof makes quick work of getting the heat build-up out of the car.

Other than that, I don’t pay attention to it.

I dont get cars with them. The sunroof takes up a couple inches of head space. I also dont like the idea of leaks or hail damage smashing out the window.

I think I answered wrong. Mine’s not really a sunroof, just a tinted glass top.

I dont get cars with them. The sunroof takes up a couple inches of head space.

I’ve had two cars with a sunroof and in both cases, the headroom was tight. The last car I had with a sunroof was a 1993 T-Bird. Sold it in 1999 and haven’t had one since. I don’t miss it.

Todays sunroofs are bullet proof, never heard of one leaking in a modern car. I have a truck with no sunroof and a roadster where the entire roof comes off…i do nothing half-assed.

The poll is kind of what I expected… Half have a sun Roof, Half do not.

Of those who have a Sun Roof, none consider it important.
Makes me wonder why so many cars have a Sun Roof?
A sun roof adds cost and can be a maintenance issue.

Before posting this I checked Youtube on the Forester Sun Roof.
There were several videos on the problems and how to repair the Sunroof on just the Forester. Multiply this by the number of car models with a Sun Roof and you see it is a problem.

Mine has never been opened. I plan to leave it that way.

===
Funny story… We were traveling in Ohio in a rented Ford Escape. It started snowing. Wife was driving… unfamiliar with the Escape. Somehow she opened the Sun Roof. In a panic, took several minutes to figure out how to close it as the Snow kept falling.

Heinz Prechter was probably the driving force behind the popularity of auto sunroofs. He started the American Sunroof Company just outside Detroit in the 1960s. They installed after market sunroofs for years and, when the auto companies saw the popularity of sunroofs, ASC installed them for the auto companies until the companies developed their own installation processes. He was heavily involved in the communities where he had facilities and well respected by pretty much everyone who dealt with him.

If you get one, just don’t forget… 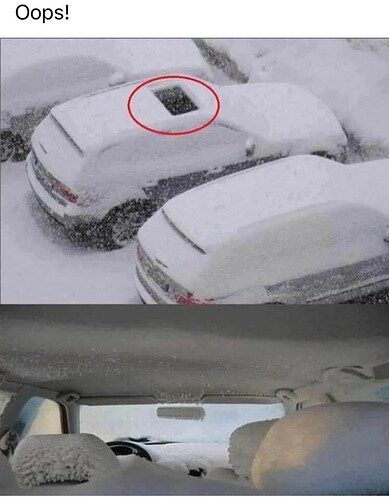 If you get one, just don’t forget…

When I had my Wrangler I left the top off and a flash rain storm hit.
It took two days to dry/air out.

When I had my Wrangler I left the top off and a flash rain storm hit.
It took two days to dry/air out.

My Thunderbird had a roof that would slide or pop up in the back. I had mine popped up and forgot about it. The car was just a couple of months old and I parked where I could look down from my office on the 6th floor and admire it. Well…it rained. Pretty hard. I watched the rain pouring down and looked at my car…with the sunroof popped up in back.

Has anyone with a sunroof parked using valet service. Then when they get their car back they hear a mystery noise which turns out to be caused by a slight opening in their sunroof.