So far.
The Dallas kicker has missed 4 extra points in a row.

I just turned the game on. It looks like Brady has already mentally checked out of Tampa Bay.

That has to be some kind of record.

As a Buffalo Bill fan, I thought the thread title was a reminder of the Bills Super Bowl record!

Guess that quarterback Dak Prescott has seen enough and voices his opinion. 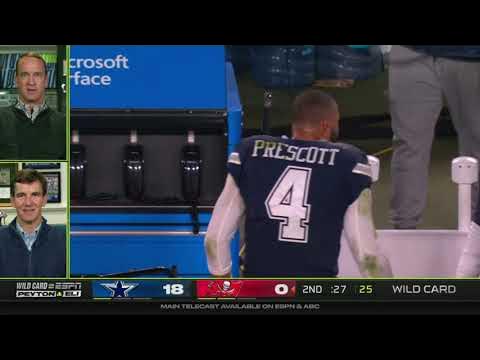 As a Buffalo Bill fan, I thought the thread title was a reminder of the Bills Super Bowl record!

I have them in my Playoff bracket winning it all.

0 for 1 today and counting.

0 for 1 today and counting.

He is actually lucky that was blocked.

He is actually lucky that was blocked.

I am going on memory here, but back in 1983 the Tampa Bay Buccaneers were playing the Detroit Lions in the last game of the season. Tampa Bay had had a lousy season already, and their kicker missed a few kicks in that game. Towards the end Tampa Bay scored a meaningless touchdown, and John Mckay sent out an offensive lineman to kick the PAT, which he did.

At this point Dallas may want to consider, that, though the PAT is more difficult now than it was then.

Edit: They can go for two every time. McKay didn’t have that option.

If the Cowboys score a TD, what will they do?

If the Cowboys score a TD, what will they do?

Should the kicker even show up for training camp next year? It wouldn’t have made a difference, but when PAT’s become the hardest thing you do, then they may have a problem.

Should the kicker even show up for training camp next year?

Pretty sure he will be an Asst. Manager at Academy Sports next year.
But an average chance that he will get a call if another kicker gets hurt or has the yips.